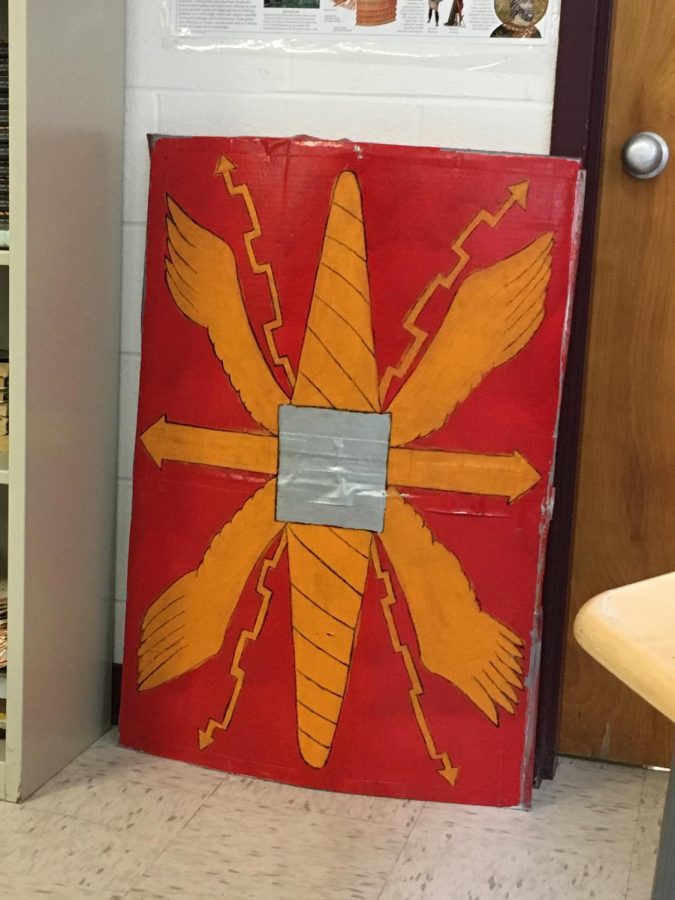 You are sitting on a stone bench with your friends, anxiously waiting for your turn in the arena. The light from the outside shines down through the floor as you hear the restless cheers of the entire population of Rome. A stretcher gets carried through the hall and you see the gladiator that went before you on it. You start to get anxious as you start to think about what will happen when it’s your turn. Then, your name is called along with the man who was sitting next to you. You are lead through corridors with holding cells for animals like lions, elephants and tigers. You see cells filled with prisoners as you continue to walk. Just then you walk out of the tunnel into the stadium. The light hits you like a wall, and the cheers of the crowd gets louder as you walk to your places in the arena. You look around, draw your sword and look at your opponent. You take a deep breath and charge. The crowd goes wild

This Spring, the GHS Latin club is planning on re-creating one of the most famous aspects of Ancient Roman culture. The gladiator games. They won’t be including the famous naval battles, or the animal fights, but they will be putting their own spin on it. Instead of crucifying prisoners and fighting to the death, they will make it a lot like the Olympic games. Anyone can join!

“We were thinking that we could incorporate sword fighting, foot races, and maybe a javelin throw.” said Kevin Kenerson, the club’s Junior Consul. “We could also use the scooters from the gym to recreate chariot races!” remarked Adrienne Saucier, the club’s other Junior Consul.

The plans for this event are in the early planning stage, but soon they will start to take action. The club ends in May, so they will have to have this at some point in late April. “We were thinking about stuff in the long term during one of our meetings and Magistra mentioned that in the past, they held gladiator games in the spring.” explained Adrienne. Then sparked the idea. They started to plan what they could use for weapons and where this can be held. There is talk of Barnard Park being the host of this event. “It has a built in race track so we can have races, and they have a long jump area so we can use that for a javelin throw.” said Kevin.

The weapons the Gladiators would use include tridents, nets, small swords called the Gladius, and they also used shields and small amounts of armor. Of course, trying to find out where and how to get these weapons is pretty difficult. There is talk of borrowing the weapons the LARP club uses or buying a bunch of pool noodles, and creating their own. Pool noodles would be cheap and fun to use, but LARPing weapons could provide them with more authenticity. “We were originally planning to make our own out of PVC pipe,” said Adrienne.

Another factor that would add to authenticity of these games would be to dress like the Gladiators. They wore only a tunic with a shield, shin guards, and occasionally a breastplate. They also had helmets. “Yeah right.” said Kevin, “Us running around in short tunics and cloths? Safety is a thing.” he remarked.

Gladiator battles were an amazing part of history and the Latin Club is excited to be able plan for this kind of event where anyone can come and compete in the fighting and in other games. Be sure to look out for posters advertising this event in the near future!