Keeping Up With Sloane 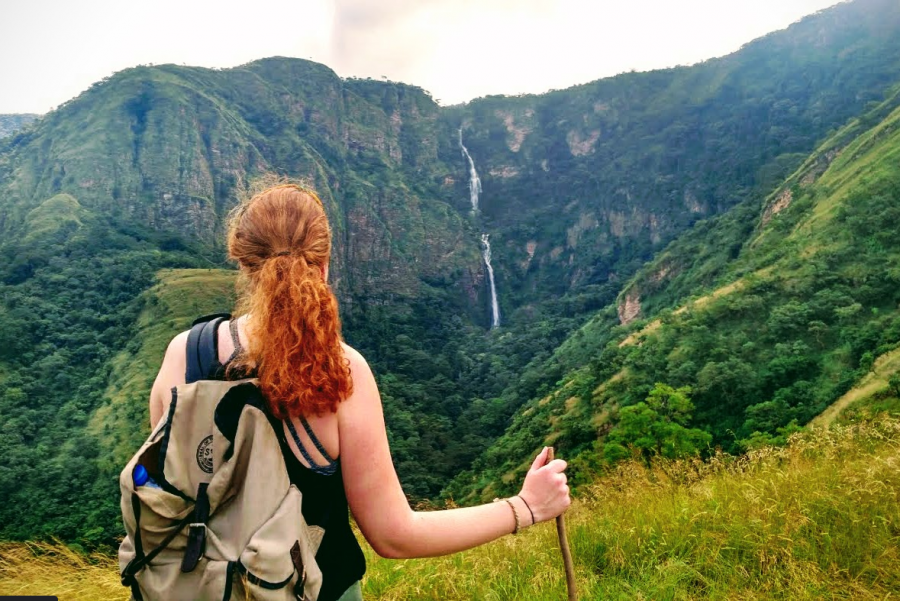 Blazing heat envelopes Sloane as she pushes the door of the volunteer house open. Along with seven other volunteers, Sloane clambers into one of two waiting taxis. She is ready to make the half hour drive from Accra to another bus station, where she will travel another hour and a half to Ada Foah. The taxi provides no relief from the sweltering heat outside. Vague directions are given to the taxi driver who claims that he knows exactly where to go. The taxi takes off down the road, dust flying up behind the car, creating an opaque cloud rolling out behind the vehicle. The trip seems as though it lasts for an eternity, bumpy and hot, crammed into a small taxi. Finally the large traffic circle where the bus station is located rolls into view and the volunteers breathe a sigh of relief knowing they will be out of the taxi soon. Then the taxi driver takes the wrong exit.

Sloane French, a Goffstown alumni, is taking a semester off from school to volunteer with the Dream Africa Care Foundation. During the weekdays Sloane works at a shelter for orphaned children. She helps them complete homework, plays games with them, and makes sure that they are safe and cared for. In the evenings there are events hosted for the volunteers. Karaoke nights are on Tuesdays and Salsa dancing is on Wednesdays. On the weekends the volunteers do not work shifts at the shelter; they are on excursions to explore the surrounding areas of Africa. The excursion this weekend is a trip northwest to Ada Foah. Volunteers going on the trip take a taxi to a bus station, where a large van will bring them the rest of the way to Ada Foah. When the taxi driver pulls off the massive three-lane traffic circle at the wrong exit, the volunteers know there is no going back. They are still nearly five kilometers from where they need to be. They know that getting another taxi driver to drive them to the bus station at rush hour will cost a small fortune. The taxi driver leaves the four volunteers, Sloane included, in a marketplace that is located at this particular exit. For nearly two hours, Sloane and the other three volunteers from her taxi wander around the market; stopping every taxi driver they can find. Desperately trying to find someone willing to get them to the bus station.

The market is hot, crowded, and loud. Everyone there is shouting as the volunteers make their way around, weaving in and out between vendors. The hunt had the capability of being a stressful situation, but all of the volunteers, herself included, decide to take the adventure in stride and roll with whatever fate throws their way. Although they are enjoying their adventure, a wave of relief rushes over the group when they finally find a driver willing to make the trip in rush hour.

At the bus station, Sloane and her group meet up with the remainder of the Dream Africa Care Foundation crew, who had taken a separate taxi. They then piled into the van that takes them to the edge of a lake in Ada Foah. The bus ride takes nearly two hours. The group left the house at three o’clock, so by the time they finally arrive at the dock, it is pitch black outside. The boat that is supposed to be waiting there to take them across the lake was nowhere to be seen. Stumbling around in the dark, using their phones as flashlights, they attempt to find the boat. No such luck. Sloane glances down at her phone looking to see if she has enough service to call for a boat and there was no such luck. None of the volunteers have the service to make a call. In the distance, Sloane spots a boat heading their way across the lake. As it pulls into the dock the volunteers recognize that this is not the boat that they were expecting, but they all clamber on board anyways, the boat swaying and rocking beneath them.

As the boat pulled away from the dock, Sloane could hear the faint trickle of water inside the boat. The water lapping against the side of the vessel was not enough to cover up the sound of water flowing inside. Using her phone as a flashlight, Sloane located the source of the noise; a small hole in the hull of the boat letting water in, making a pool at the bottom of the boat. For fifteen minutes Sloane grips the edge of the boat, trying not to think too hard about the hole seeping murky water into the hull. Finally, the boat bumps up onto the shore with a subtle jerk. Sloane and the others clamber out of the boat and onto the beach where they will spend their weekend. Sloane shares, “It is important to not worry about things that are beyond your control. Just sit back and enjoy what life has to offer; there is a possibility of adventure in everything.”