Lane Teacher of the Month 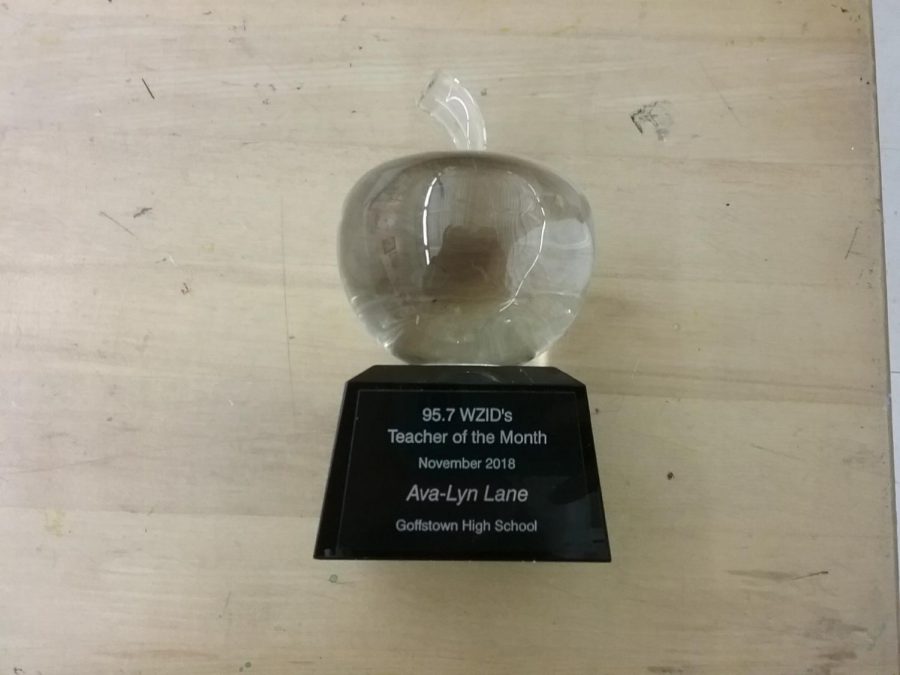 Ava-Lyn Lane, an art teacher at GHS, directs a student to a cabinet to retrieve two necklace display models. The student returns with a black model and a white model, noting the black model has dents in it. Mrs. Lane explains it is okay and she will fix it with a little photo edit. She places a stunning piece of jewelry on the black model and snaps a couple of pictures. Next, she takes a photo of the jewelry on the white model. Only two days before, Lane was recognized as the Teacher of the Month for November by WZID,  a local radio station.

Over the years, Mrs. Lane has taught a variety of art classes totaling 60 different courses. Mrs. Lane’s favorite type of art is any dealing with design, textures, colors, and shapes. She also listens to WZID in the morning on her way to school, but had never heard about WZID’s Teacher of the Month Award until they awarded her. The award is anonymous and all you need is the teacher’s name and why the teacher should be nominated. The WZID award is sponsored by Auto Fair, and they award ten teachers a year.

“I thought they were just visitors,” Mrs. Lane says, describing the WZID people who came to award her, “I invited them to look at the artwork that the students were making.” They replied that looking at artwork was not the reason they were there. They announced to Mrs. Lane that she was recognized for being “…the advisor to a very large club at Goffstown High School, which she has done for forty years despite it being an uncompensated position.” She was awarded with an apple trophy, flowers, a Yeti thermos, and a Copper Door gift certificate. She humbly accepted the award, with surprise.

Rebecca Biederman, a sophomore who attends Mrs. Lane’s after school Art Club, explains the basic logistics of Art Club. “Mrs. Lane gives us a different artistic project every time.”  She starts off by giving us as much advice and examples of how to do the project. Then, you can do anything you want with the supplies given. “She will then walk around a give compliments and advice,” she says with a smile.

Mrs. Lane thinks that it was very kind that WZID awards teacher. “The apple sculpture is very cool,” she says enthusiastically. “I don’t know who nominated me, because it is anonymous, but I am very happy that they did.”