Pick the best and leave the rest 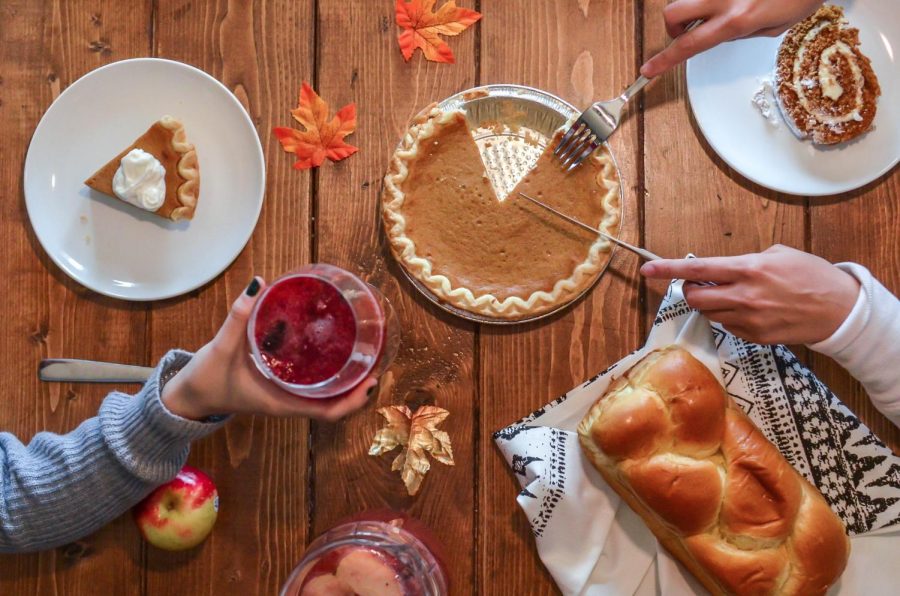 Thanksgiving. Turkey day some may say; the day we all gain ten pounds and sleep for at least two days. We all know the true meaning of Thanksgiving isn’t to give thanks but to eat till we can’t walk. So when you’re stuffing your face, you need to know what to grab to ensure maximum taste and fullness. We all know the food staples of Thanksgiving. Granted some may go for a different route ordering a pizza or chinese takeout, but on Thanksgiving I will be sticking to your old fashioned turkey dinner.

There are two parts of Thanksgiving: the main meal and dessert.

Turkey on Thanksgiving is presented as the star of the show, but we all know it is truly, just for show. There are many other side dishes that are much more delicious than an old, dry, turkey. Select teachers and students surveyed on their favorite Thanksgiving foods cast votes for a variety of foods.  Turkey received ten votes, while stuffing had thirteen votes, and mashed potatoes with the most votes, sixteen. While mashed potatoes is a strong contestant with strong attributes at the end of it, it is too simple to be the best. A simple starchy paste can’t take home the best Thanksgiving food while there is an obvious top food. Stuffing, a mix of delicious spices and different breads, vegetables that just melt in your mouth is the crystal clear winner. It is superior to all other forms of Thanksgiving food. When you eat it the flavor runs through you like a warm, flavor-filled drug that you can’t get enough of. The turkey is just a crust to the stuffing on the inside, the treasure you are working towards.

The true failure of Thanksgiving is squash. Without a doubt squash brings pain into the lives of people who consume it. With a total of three votes in the survey, I can conclude there are three witches in the school who are trying to destroy good food. Squash is a mushy flavorless failure that creeps its way around the dinner table only to be forgotten and disposed of.

Now it’s time for dessert. You look around the battlefield, there’s a turkey carcass, cranberry sauce stained shirts, everyone is slowly drifting into post-meal comas, but the smell of sweet sugary delights flood the room. Even though you are as full as you could possibly be, you shove it down and get ready for round two. There are five contestants in the dessert category: pumpkin pie, pecan pie, apple pie, banana muffins, and sweet potato pie.

I will say there is one pie that sank below the rest. Sweet potato pie clocked in at 0 votes among everyone surveyed. This was interesting because I heard some good opinions on sweet potato pie from many of my teachers, but no one else. I assume that teachers lives are so dull that as they age their taste buds dull too. Imagine life is a sandpaper that slowly drags across your tongue over the years. I asked a few adults their opinions on sweet potato pie, some people said ” I like sweet potato pie”, and another said “I’m a fan of sweet potato, but I’ve never had sweet potato pie”.  While asking the students one said “what the hell is that?” another just made a throw up noise. There were many more dislikes to sweet potato pie in the student category. This confirms my theory that adults have horrible taste in food and should never be relied upon for dessert choices.

I can’t speak on pecan pie since I’ve never had it, and since it only had five votes it’s an irrelevant contender. The two with the most votes were pumpkin pie and apple pie. Apple pie with 22 votes and pumpkin pie with 16. I love both pies, but I must say apple pie has more room for spice and delicious flavors that are encapsulated in the fresh crisp apples. Apple pie is a classic and deserves to be known as amazing, but there was one person who brought such a wonderful pie that even it isn’t a normal Thanksgiving dessert- coconut cream pie. It is an exotic, moist, and sweet pie that just melts in your mouth. It is an underdog that truly takes it home with the fluffy and flaky coconut on top, putting it over the edge. The power of the pie scares off most Thanksgiving goers, but I can handle the absolute superiority of the coconut cream pie.