What is Model Congress? 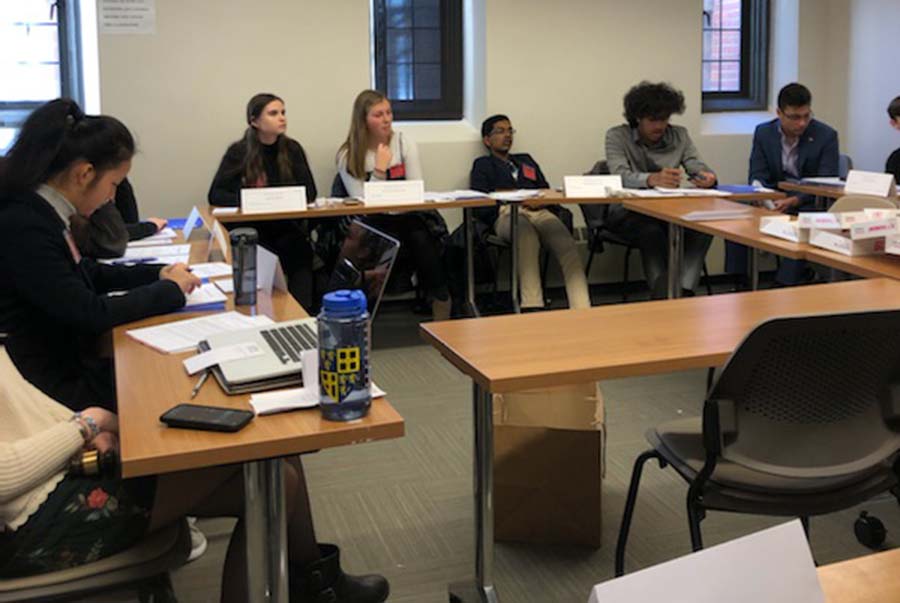 Model Congress is a club that is offered at Goffstown High School. The purpose of the club is to give students a better understanding of how a small portion of our government is run. Model Congress is sponsored by Mr. Westphal and has an elective President, Vice President, and Secretary. The club meets every Tuesday and Thursday after school at 3 p.m. and usually runs to 4 p.m..

During the meetings, students vote on a bill selected from the book of student legislation. This student created book is brought to every meeting and contains years of collected bills. After students have chosen a bill, they will then debate the bill by giving brief four minute and then two minute speeches either for the bill or against it.

After heated debate the students can then vote on adding amendments (changes to the bill), or just vote about whether to pass the bill or not. If a student wants to introduce an amendment, the student must give a speech on why they think their amendment will make the bill better. After the voting for the amendments is over, the students must vote on whether to pass the bill or not. It is a learning opportunity for those wanting to know more about how our government works. According to Joey McNeill, “sometimes it isn’t that serious and is fun, but sometimes when it gets serious it becomes super beneficial to learn from it.”

The GHS Model Congress is beneficial for learning in a friendly environment and has helped many students. It also looks great on a college resume. Mr Westphal notes, “Model congress is probably one of the most important clubs the school has to offer. It touches on word comprehension, debate skills, and analysis which is vital for those pursuing a career in politics”

Model Congress’s next event is in April in Concord, New Hampshire. This event is sponsored by the YMCA Youth and Government program. This event will unfold in the state capitol buildings. According to the NH YMCA Youth and Government Program, the main goals of this model legislation is for students to gain leadership training, develop critical thinking skills, participate in the legislative process, improve communication skills, and increase awareness of the social issues in the country. If you are interested in learning more, go to room 213 and see Mr. Westphal for more information