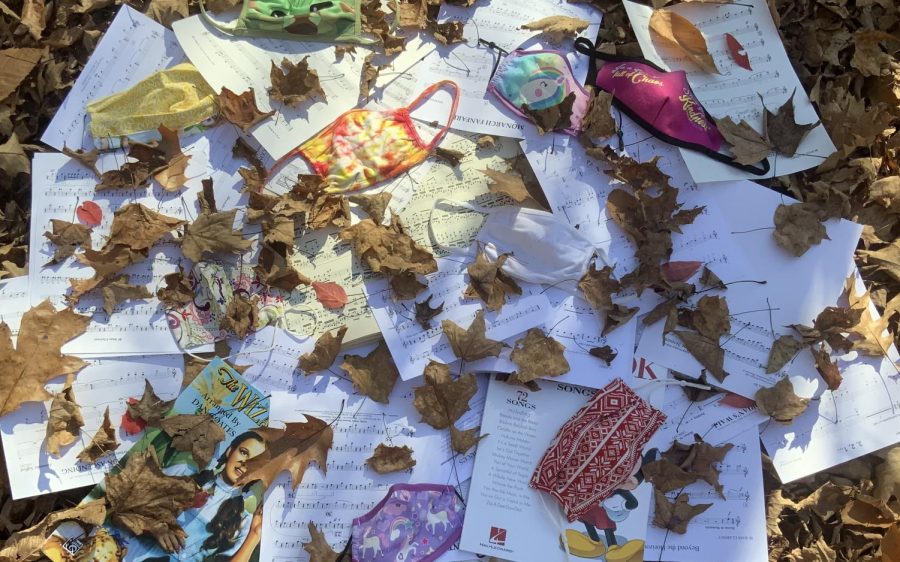 Music during COVID has changed drastically, from the musician’s masks to the way rehearsals are being held to how each ensemble is split up because of the cohorts. Musicians that play wind instruments have to wear a mask that is almost like two half masks that overlap so they can fit their mouth piece in between them. Flutes are similar but because the instrument is played off to the side, the hole for the mouthpiece is to the right side as well. For singers, they have to wear masks as well because, as Mr. Desrochers, one of the music teachers at GHS, explained that “singing is a super spreader.” The masks muffle their sound though so to combat that, the proposed mask design is with wires to lift the mask from being pressed against the face while still covering the mouth and nose and doing its job.

Another way the music department is trying to prevent the spread of COVID while still getting in rehearsals is to play outside while the weather is good. For wind instruments especially, practicing outside for the majority of the class with masks and bell covers, pieces of fabric that look similar to shower caps with elastics covering the opening end of the instrument, helps prevent spreading the virus. Band is held outside M2 on the concrete slab next to the school while chorus is outside the office and lobby in the L-shaped portion of the school, usually in a circle so the singers can hear each other better, and the orchestra is held in school in M2. When the weather gets colder or is just bad in general, band and chorus groups will be rotating around the school, going to different rooms like the step room or music department lobby for about 30 minutes each before moving to a new room.

Since in the hybrid model students are separated into different cohorts based on their last name, this affects who was in each ensemble. In band, most of the higher instruments like oboe and flutes are in the A cohort while the lower instruments like brass are in the B cohort; similar for singers as well. This leads to less balance in each group and it makes it harder for the musicians to hear every part of the music. Along with the cohort situation, freshmen are completely separate from 10th-12th grade rehearsals. Mr. Desrochers said that this was to help them transition into highschool during this pandemic. He also mentioned that, if things continue to go well, that the freshmen will be joining the 10th-12th grade in January. While they don’t have rehearsals with 10th-12th grade, the freshmen have some of the same music as they do. This also comes into play for the virtual concert. Each musician has to record themselves playing/singing their part for each piece and send their recording in to Mr. Desrochers and Mr. Belding so they can edit each person’s part into one video. Sadly, because of copyright issues, the recordings are only going to be given out to the performers in each ensemble and not posted for everyone. They can still show it to friends and family, it just won’t be live streamed or posted on YouTube. The virtual concert date is set for November 9th and, if everything goes well and the pandemic dies down, says Mr. Desrochers, there may be a possibility of having an outdoor concert in May.