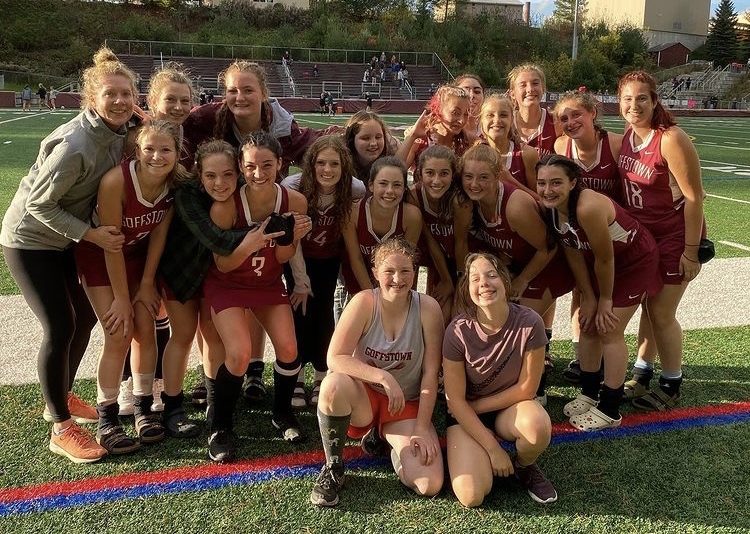 The Goffstown Field Hockey team had an incredible win in the playoffs against Hanover, putting them into the final four. Hanover was undefeated (and the first seed). Their record during the regular season was 13 wins and one tie. On the other hand, Goffstown was ninth seed, with a record of 9 wins and 6 losses. Going into the quarter final game, Hanover was confident they could win. To them, Goffstown was an easy win and just another stepping stone to their seat at the championship. However, this was not the case.

In the three weeks since Goffstown played Hanover, and lost 3-1, the Goffstown players had been working hard and their resilience to push back was shown off on Friday. With their supportive leader, coach Jess Brown, pushing the players to be the best they can be, and promoting team bonding, Goffstown went into the game excited and pumped.

Goffstown’s intensity on the field was outstanding throughout the game. During the first quarter, Ava Jones scored the first goal of the game putting them at a lead of 1-0. Soon enough, Hanover tied up the game and you could tell the morale had dropped in the Goffstown players. At the end of the first half, the team huddled up, coach Jess had the team take a deep breath, and settle.

Starting the third quarter, the GHS players played with everything they had and left their mark on the field. Win or lose: they were going to work their hardest to show they deserved to go to the final four. Near the end of the third quarter, Ava Jones scored her second goal of the game putting them at a 2-1 win. Grace Murphy, a captain of the team, shared   her thoughts of the game when she said, “Goffstown played their hearts out together as a team… Every line was very strong and we played as a whole unit.”