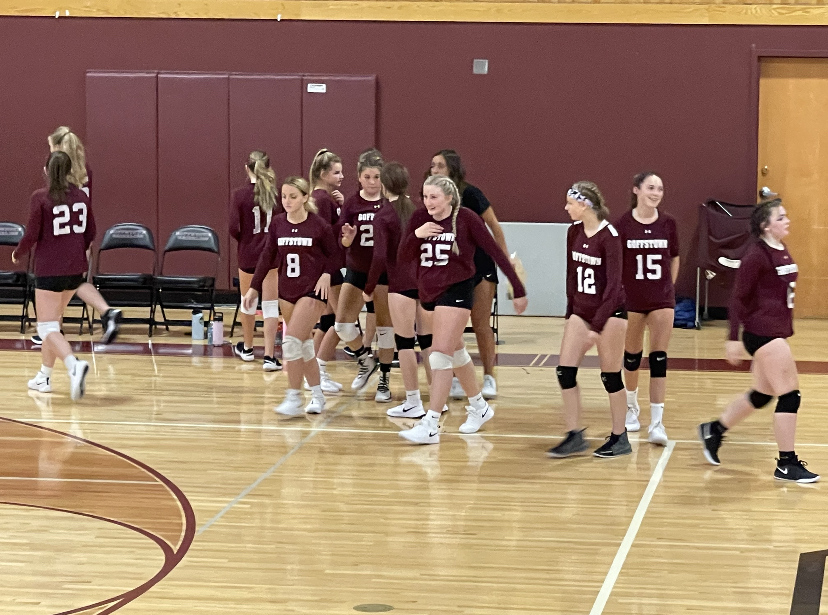 The reserved girls’ volleyball team of Goffstown High School has remained, practically, undefeated in their 2021-2022 season. The team has won a majority of their games, losing only two games, to Bedford and Salem High School. As their season comes to a close, a number of the team’s members were asked to share what they feel makes their team exceptional and how they rally together to form their own tight-knit community.

The Reserved Team has experienced their fair share of success, conquering 13 out of their 15 total games played. Nearly every game, the team has been victorious in winning all three sets. Freshmen Ruby Rouillard, Emerson March and, and Sydney Calef all agree that they owe a majority of their achievements to their team’s bond with one another. “… Our team’s relationship; I think we all love each other on a personal level and that really helps us work together, better, as a team,” says Sydney. Another vital aspect of their dynamic is communication on the court, like giving a fellow teammate positive feedback, as well as working together and maintaining a positive mindset. “Attitude,” Addisyn Normand observes, “100% plays a role in whether we win or lose a game. If we all have bad attitudes, then we don’t work together as a team. ”

Not only does volleyball provide a support system for the girls, it also pushes the girls to become better students. The responsibility of completing and turning work in on time, in addition to the added pressure of having certain grades being necessary to play, encourages them to strive to do their best. “ For me, personally, volleyball has helped me become a better student. It makes me want to focus on keeping up with my school work a lot more. I’ve wanted to do a lot better with my grades, and I’ve found myself being way more dedicated to keeping my grades up than I ever was” Sydney remarked.

One of the most difficult games they have played thus far is their game against Bedford High School. Even though the girls’ put in a substantial amount of effort, they ultimately ended up losing the game. A particular thing they felt they lacked during that specific game was cooperation between teammates. “The game I found to be the hardest, (and I think the whole team can agree with me on this), was Bedford. I truly think we could have played a lot better if we worked together better and were a lot more supportive [of one another].”

Throughout their season, the Reserved Girls’ Volleyball Team has experienced their fair share of hardships, but despite them, have remained resilient. Becoming one of the most difficult teams to defeat in Division 1, they have formed tight bonds with one another and learned the importance of cooperation, and above all, resilience.