Gabe’s phone rang unexpectedly. When he answered, he was greeted by the familiar voice of Mrs. Nichols, his Art Honors teacher. “You won the contest!” This alone was a surprise to Gabe, as he hadn’t remembered entering a contest in the first place… but what followed was enough to stun him completely. $1,500 was to be his prize.

As a high school art teacher, Mrs. Nichols is asked every year in March to submit several art pieces for Youth Art Month. This year the theme for the art submissions was water. “It was actually a very abstract piece but it ended up looking like water, so I decided to submit it,” Mrs. Nichols remarks of Gabe Lescarte’s prize winning piece. “It just happened to look like water so we figured, eh, why not. And look what happened. You never know. You just never know.”

Thinking back to the surreality of the situation, Gabe reflects “I had no idea… I just thought she was submitting it into an art show. The day I got the call was the day I found out it was actually a contest.”

The awards ceremony for the contest was held at Plymouth State University on March 29th and welcomed anyone who entered a piece. All of those who won for their grade level were awarded a certificate. But Gabe “took the cake” winning the whole competition all-round with the Sargent Sponsored Art Prize, and was presented with an enormous check for $1,500.

In the past Gabe has won several art awards including two Scholastic Gold Keys, a Silver Key portfolio, and two honorable mentions. But this competition was the first in which he had been awarded for a 2-dimensional piece. “Almost everything that I’ve won an award for was 3D, but this was a painting. It’s a lot more free… I tend to be more tight with my work but this one was a lot more loose,” Gabe mentions of his work.

The painting, titled “Sapphire Surge,” is a stunning blue wave with an incredible amount of depth and texture which Gabe credits to the modeling paste… “It kind of looked like a lot of layers of paint but it was really just one or two layers over modeling paste… I think that’s really what caught the judges’ attention.” 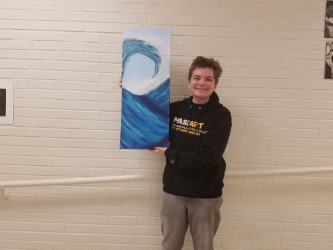 Gabe plans to put the prize money toward either art supplies or tuition for Massachusetts College of Art and Design in Boston, but he wasn’t the only one walking away with a well-deserved reward for this painting; as Gabe’s art mentor, Mrs. Nichols was awarded $2,000 worth of art supplies which she says should be arriving at the school any day now. “I don’t know what they’re delivering. It’ll be a surprise,” Nichols says with a twinkle of excitement.
“I think for me, what was really important about winning this competition was that I tend to doubt myself with my 2D work, and the fact that the judges saw something different than the other work made me feel like I could stand above the others,” Gabe proudly states. “I think that kind of reassured me that I’m not as bad as I sometimes think I am. It gave me sort of a confidence boost. Now I’m not as hesitant to go into painting as I usually am.”